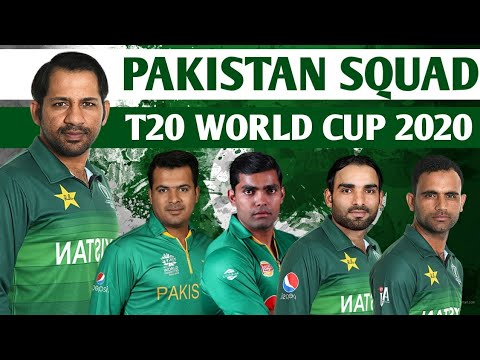 Pakistan Squad for T20 World Cup 2021 is not yet announced. Pakistan’s squad will be announced after the PSL. Pakistan is rank number one in ICC t20 rankings, Pakistan is a force to be reckoned with in the world of Cricket. Being the most unpredictable team out there, Pakistan can win with any squad at their disposal when it comes to T20 cricket. Because this limited over cricket has always been a part of their cricketing culture, Pakistan is full of talent for t20 cricket. In every gully, every nook, and corner you would find someone with a high aptitude for t20 cricket. Pakistan is full of exciting talent, and this makes it difficult to get a place in the Pakistan T20 squad for the world cup.

Much is not said or heard about when Pakistan Cricket Board is going to announce the Pakistan squad for the t20 world cup. All is left for speculation but the squad is expected to be announced a month or two before the start of the world cup. As we know, Pakistan is full of talent, so it would be difficult for PCB to announce the squad without giving a proper chance to all the youngsters.

PCB is going to wait until the PSL, Pakistani premier T20 tournament, and then they will announce the T20 squad for the world cup. But we can speculate on our side that what players are going to be selected for the T20 world cup. And that we will do for you today. Thus following is a list of some of the players who we think are going to be crucial for Pakistan’s chances of winning this T20 world cup.

As we have told before, Pakistan is full of cricketing talent, and it is going to be exciting for the whole world to witness the talent that Pakistanis are going to showcase in this T20 world cup. The following are some of the players that we have shortlisted that we think are going to be instrumental in Pakistan’s success in the upcoming T20 world cup 2021.

Since his debut in international cricket, Babar has been a fascinating talent and a treat to watch for cricket fans. His solid technique and calm composure have led to his success in international cricket, especially when it comes to limited-overs cricket. Babar has excellent stats in One Day International and T20 internationals with batting averages of 54 and 50, respectively. He provides calmness to the batting lineup and successfully has taken over the role of a one-down batsman. He is currently ranking top among the batsman in the T20 rankings and had a nice run with the club tournaments in England.
With such an amazing talent, Babar is sure to make it into the Pakistan T20 world cup squad.

With such an adroitness with the ball, Muhammad Amir was selected in a talent hunt by Wasim and Imran khan. His ability to seam and swing the ball at a high pace and smartness with the ball in the later stages of the game made him a premier fast bowler for Pakistan’s side and a leading fast bowler. But following his fixing scandal, he was banned from playing cricket. Since his return to the international cricket scene, he has proven himself to be a spearhead for Pakistan’s bowling attack and provides early breakthroughs.

With his wicket-taking ability with the new ball and ability to contain runs, it is not impossible to say that Amir surely is going to play this edition of the t20 world cup if the fast bowler is able to retain his form and fitness until the final selection of the team.

With continuous hard work and outstanding performances in domestic cricket, Iftikhar finally came on the radar of the national selector for his selection into the Pakistan squad. He made his debut into the national side in 2015 but failed to impress the selectors due to his poor performances. But since then, he has made a strong comeback in the national squad. Averaging 50 in List A matches with an impressive strike rate he was selected in the T20 side and since then has been performing well.

He is the hard-hitting batsman that the Pakistani side was craving since the retirement of Shahid Afridi and if he retains this kind of performance, he is sure to cement his place in the upcoming T20 world cup squad

With his furious pace, Wahab Riaz filled in the shoes of legendary Shoaib Akhtar and has some good performances here and there since his debut into international cricket but has been inconsistent. But with his recent performance in the T20 leagues can steer him in the Pakistan T20 World cup squad this season.

Wahab is also quit the longer formats of the game, eyeing his place in the T20 squad, and if he can impress the selectors and management with his performances, he sure will be an excellent addition to the team. His pace and handiness with the bat later in the batting order make him a good asset for the T20 team.

With his pace variations and drift in the ball, Imad is a classic left-arm spinner. He is also handy with the bat when the situation calls for it and has saved his team numerous times when need be. Thus Imad can be a useful addition to the Pakistan T20 World Cup Squad 2021.